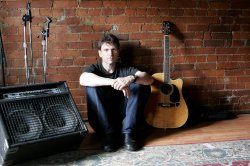 He has just released his third CD entitled “Encore” and is currently promoting the CD around Canada and the rest of the world.